We are excited to have celebrated the groundbreaking ceremony for FineMark National Bank & Trust new headquarters, which took place Thursday, November 7. FineMark purchased The Atrium, a former 127,000-square-foot shopping center, for $5.96 million in September 2018. The new location, just east of the Cape Coral bridge, is less than a mile away from their current 20,000-square-foot building. The design for the new headquarters is being built to accommodate FineMark’s rapid growth with a prominent presence on the College-Winkler intersection where an estimated 37,200 motorists pass every day.

Stevens Construction is managing the project, which will consist of a 60,000-square-foot headquarters and an additional 7,000-square-foot building that will be located on the south side of the property to be leased to other businesses. The project will include recycling roughly more than 90 percent of the existing building.

There will be about 30 subcontractors used to complete the building and over 120 construction workers on site in the days leading up to the grand opening in November 2020.

Studio+ designed the headquarters with FineMark to be centered around community relationships and transparency, which will be applied to the building’s interior as well as the exterior.

The three-story building will be positioned on a 45-degree angle so that the front door points towards the College-Winkler intersection. The building will have three floors, the first floor’s focus will be reserved for personal banking and include a commercial kitchen to prepare meals for special events. A grand lobby will be incorporated to match the elegance of the building. The third floor will have offices which include those of board members as well as FineMark’s trust and investments.

The structure’s architectural elements will make a timeless statement that reflects the values of a trustworthy and solid financial institution, while representing the importance of client satisfaction. 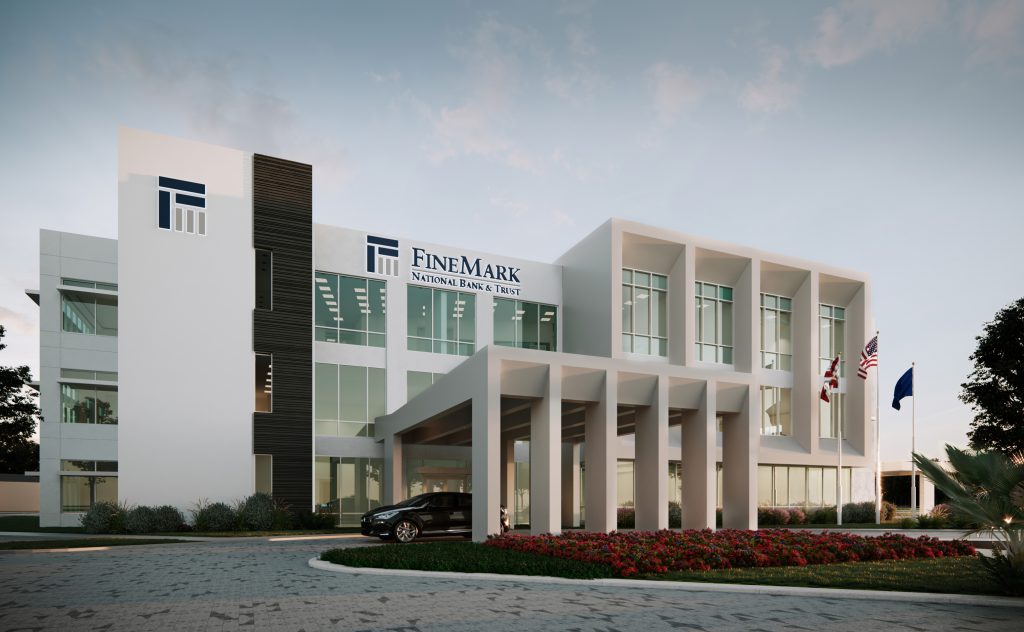